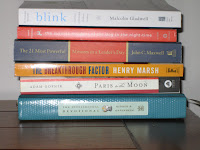 Formally studying English Literature for 6 years ruined me.
The literary academia modus operandi is to completely devour as many rich, complex and significant works in as little time as possible. For example, I remember being assigned to F. Scott Fitzgerald's 'The Great Gatsby' one week and Hemingway's 'The Sun Also Rises' the next, with a complete comparative essay on the two works and similarities/dissimilarities of the authors and their influences due the third week. I was capable, for sure, of plowing through texts and and cranking out essays ... but the thought always lingered on that I wished I had more time to really sink my teeth into the works - to really get to know the nuances and idiosyncrasies of the author, the character development and, most intruiging to me, all of the little clues of the time period and culture that the author had experienced and assimilated in his or her life. I guess that's the purpose of post-graduate studies ... and I, sometimes regrettably, opted out of that.

The result, however, is that now I can't help but take everything I read so seriously -- wondering about the background of the author, their intent, their influences. What is the message they are trying to send? Is it a gift of awareness to the reader that allows one to think outside of their own paradigm and thus sense liberation or compassion or fear? Or is it a facade of purposeful confusion and paradoxical rhetoric? I hold myself very accountable as a reader to these things - I was trained to do this - to make sure I'm getting out of the work what it is that I believe the author intended, but to also sense the potential limitations of their ability to reach and engage the reader and see their career's progression ... those who follow music and singer's careers can relate to this. As a result, for me, reading is often more work than pleasure - but always enriching, nonetheless. (And hence, I don't play nice in book clubs!)

Now I embrace the luxury of taking my time to digest a book - regardless of it's deemed literary importance - as methodically as I would like. Gone are my childhood days of reading "Superfudge" cover-to-cover, over and over again on Saturday afternoons. Now, at any given time, I have several books going at once ... enjoying just a few pages at a time to their fullest extent and giving myself a good amount of time to absorb all the little nuggets of goodness and, possibly most important, to be personally influenced.

I have 6 books on my nightstand now ... some are gifts, some I've had in my library a while with 'good intentions', some are results of self-entertainment-at-the-airport-when-there's-no-other-good-shopping-to-be-found. They are quite diverse, and I'm enjoying each of them just a little bit at a time:
1.) Blink - from the author that brought us a great ah-ha book, The Tipping Point. I'm enjoying reading and thinking through the idea that it's actually OK to believe in your instincts and initial reactions to people/places/things
2.) the curious incident of the dog in the night-time - a fictional work - unusually clever character study - very honest and observant - of a autistic teen
3.) The 21 Most Important Minutes in a Leader's Day - an empowering reminder to work on 'lifting your lids' of limitations - and letting others help you do this
4.) Breakthrough Factor - a good reminder to seek success through a life of values and principles; sage advice from an Olympic runner
5.) Paris to the Moon - A memoir of an American family's attempt at life in Paris -- complete with many anecdotes of the stereotypical and unexpected surprises
6.) The Intellectual Devotional - this concept seems kind of silly - but it's like a 'daily' history lesson ... or the reader's digest version of all of those History Channel documentaries that look so interesting but that I never have the time for. As an example, I just read a quick page about Eratosthenes (who I had never heard of before) ... the ancient Greek who discovered how to measure the circumference of the earth ... part of his solving the puzzle was to hire a professional pacer (who knew?) - who turned out to be shockingly accurate at 'pacing-off' distance compared to today's technological means. Oh yeah - his findings inspired Christopher Columbus's voyage .... so why am I just now discovering Eratosthenes??

I have studied Beck's body of work much in the same way as you read books and have my own reading of lyrics such as 'flash dance ass pants'. That's one of the beauties of thing created- there are often more than one way to interprit something- some make more sense than others of course.

Beck most certainly falls into my 'purposeful confusion and paradoxical rhetoric' category ... there's no doubt that he is one of the more talented and creative artists out there -- and you'll challenge your mind just by trying to keep up with him/figure him out.