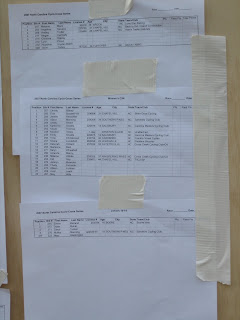 Yes, I actually had to take a picture of the result postings to believe it and have proof. Not only was yesterday my first cyclocross win, it was my first cycling win, period! So it is a pretty big deal for me. As a matter of fact, I was kind of in disbelief...mostly because it was an odd start with both the Women's A and B races starting together. The A's were to go 45 minutes, the B's only 30 (I'm a B ... see post below i.e., just started this stuff), but we all started at the line together. Combined, there were 30+ women. My startline self-talking-to (crazy, I know) went a little something like this: " ... just forget that there's multiple races here ... who cares ... do your 30 min as hard as you can and don't concede anything ... get the best start you possibly can ... and get into the top 5 by the first corner at all costs ... then, don't concede anything to anyone ... "

I did have a good start - by design (thanks to Andy Applegate @ Asheville Velosports for drilling this into us at the camp). Based on my (very) limited experience, I can't believe that there is any other single more important thing in a cross race than your start. I got to the first corner in 3rd position and passed #2 after a few corners. #1 and I toggled back and forth a few times on the 2nd lap, and I finished my 3rd lap (and therefore the end of my race) a few bike lengths behind #1, who went on to win the A's, two laps later. I really was cooked, though ... not sure I would have had the goods to hold position #2 for another two laps had I raced with the A's ... my fitness just isn't very deep yet. Nonetheless, I'm thankful for the good start, the win and the schwag that ensued. 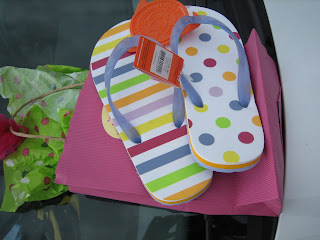 Who needs a cash payout when you can win these sweet victory flipflops??
I absolutely love them. I will definitely be sporting these pool-side come springtime ... and maybe to a few races. Other goodies included a very cool gold cyclocross medalion (which I may very well attach to a gold chain and wear around) and a very strange hair accessory that I refuse to wear. Ever. Well, unless I dress for an 80's party, that it is -- then I would dig it.
I owe my good result to my very cool Specialized tricross with the best dialed-in fit by Wobble-naught fit doctor Jim Baldesare (even though he won't give me stickers to put on my bike), Tim and the NC CX crew who put on the 'cross clinic at this same venue a few weeks ago (giving me a heads-up on the course), JNK for lending his cx wheels so I could have wheels in the pit and peace-o-mind, and my coach JB for making sure my head was screwed on straight for the race! 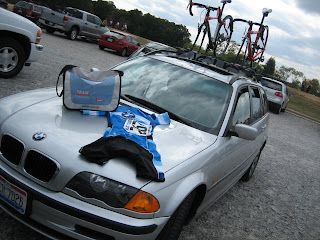 The 323i has grown on me over the last couple of months. It's a great go-to-the-races car. Here you can see both my road (driver side) and 'cross bike (passenger side). The best thing about the car? The heated seats, for sure ... I believe its the best pre- and post-race therapy you can give your legs. No matter how hot out it is, I love having the heat on my legs while driving -- even if that means I have to crank up the AC. I also need to give props to John G of The Two Johns Cycling Podcast for gifting the sweet Team Sparkasse pro-issue bag to me ... and thanks to the other John for acquiescing.
Now, I know what you are thinking: What is the deal with the super-huge race number?? I'm advocating for women-specific race number sizing ... because this is rediculous. It's practically 8.5 x 11 .... we might as well pin the New York Times to our backs. I'll bet if you look closely enough you can pick it up on Google satellite imagery. Last week I tried the trick of folding over the 'promo' lines along the top and bottom and pinning on just the number - very svelte - and did I ever get the business at the start line ... little did the official know it only fired me up that much more ... 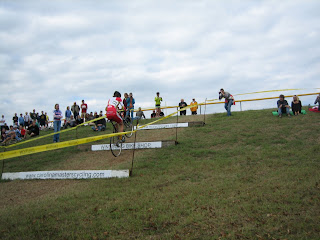 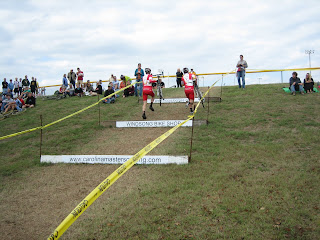 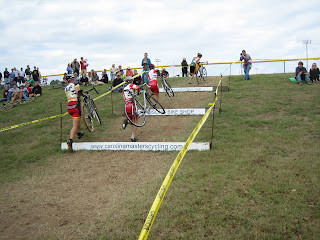 Congratulations Christy!
Not only for the win, but for the move to blogger-land. It looks as if you have found your racing style down in NC.
We miss you guys!

Nice job on your first win. Corss is by far the most painful form of racing i have done, but at the same time the most fun.

Also, this site is like Oprah's Favorite Things without the obnoxious host.

Leave it to a Chicagoan to make the Oprah comparison (which was completely lost on me, by the way!) ... 2G - I visit your blog often - do you mind if I link you to mine? OH!-and let me know when Beck is due back in Chicago-would love to make the trip and see you guys.

Please link me, and I will do the same for you