John M is a really fun friend. Great to ride with and talk to -- and is the benefactor of my much adored Assoc Airblock bibtights. About a month ago, he sends this book to the apartment: 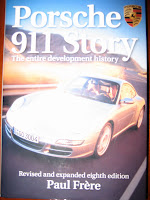 As it turned out, John M had test-drove a 911 Turbo and, while still being in love with the '96 911 993, just couldn't get the Turbo off his mind and was feeling compelled to upgrade. The obvious problem for John M was, then, what to do with the normally-aspirated 911? JNK to the rescue. Upon delivery of the Turbo from the Windy City to the Queen City of the Midwest, a blockbuster deal was struck and the Queen City of the South's auto census became +1:

nice...will look great next to your bmw!

WOW! my cars will definitely have a complex next to that!

What a beauty--doesn't look much like a 'grocery-gettr." What does the speedometer go up to? Love, Mom